What’s the Plogging for Orcas Challenge?

It’s a fun campaign that challenges you to plog during the month of June while raising funds for Georgia Strait Alliance’s efforts in the protection and recovery of Southern Resident orcas in the Salish Sea. This challenge will help you get active while helping divert waste from the Salish Sea and preserve a clean environment for marine species such as the iconic Southern Resident orca.

Plogging is a Swedish eco-fitness trend and word that combines picking up litter with jogging. You get fitter while enjoying all the benefits of being outdoors, and the environment gets cleaner: it’s a win-win! Grab a pair of gloves to protect  your hands and a bag,  pick a place you love (your favourite trail, beach, park, neighborhood sidewalks…) and be on your way! We’re not particular on jogging though – the challenge can be done while doing a variety of outdoor activities like strolling, fast walking, jogging, running, skateboarding… any activity of your choice, skill and ability!

How does it work?

From June 1-30, you, on your own or with friends or family, will commit to plog and collect at least 75 pieces of litter from a public place, beach or park. During that time, you will also be fundraising for GSA by asking your friends, family and community to sponsor you on your challenge. It’s that simple!

Why 75 pieces of litter?

There are only 75 Southern Resident orcas in the Salish Sea. The goal is to pick at least one piece of litter per orca.

If you are feeling like 75 pieces for the entire month is not a big enough challenge, you can pick as many as you like and report back your total on this survey (link to come) so we can collect the data, and join the Super Ploggers group!  (optional)

How does it relate to the Salish Sea?

Georgia Strait Alliance’s focus on the Salish Sea has always included advocacy and education on contaminants, from its very early days with the ToxicSmart program encouraging toxic-free homes and gardens, and improved treatment of effluents from pulp and paper mills, to advocating for tertiary treatment for wastewater, and oil spill preparedness.

Southern Resident orcas, listed as endangered in Canada and the US and of which only 75 remain, typically spend most of the year in the Salish Sea, except for the winter where they disperse to hunt salmon elsewhere on the North Pacific coast, from California to Alaska. The three key threats affecting the population’s survival are prey availability (scarcity of Chinook salmon), noise pollution and vessel disturbance, and environmental contaminants.

Last but not least… there will be rewards!

When you register to participate in the Challenge, you are automatically entered to win PRIZES! 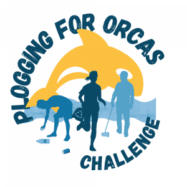