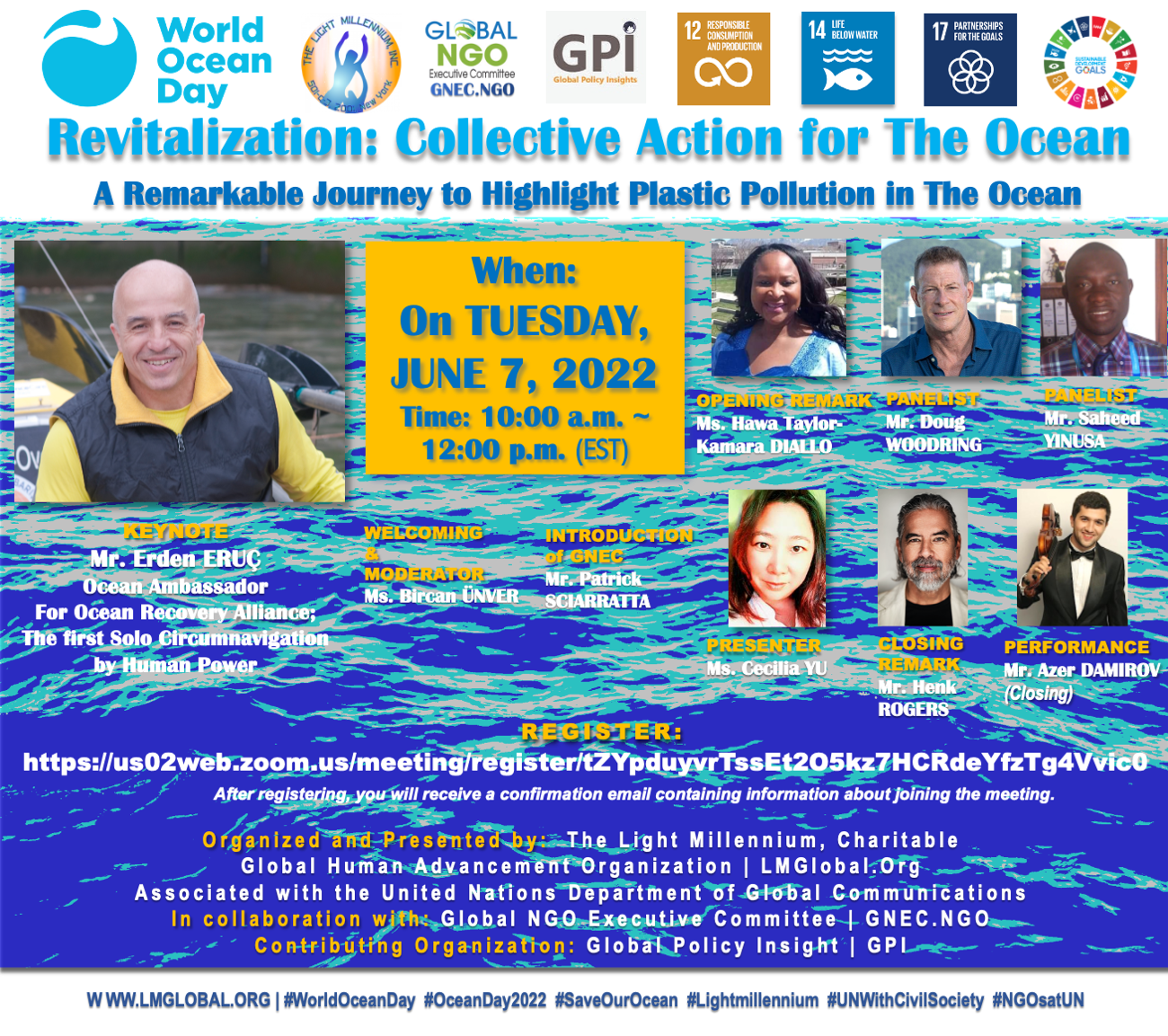 The panel will highlight “A Remarkable Journey” by Erden Eruç, Ocean Ambassador, Ocean Recovery Alliance on the ever-increasing and threatening Plastic Pollution in our Ocean and ecosystem at large.

The session aims to contribute toward the 2022 Ocean Day’s theme, “Revitalization: Collective  Action for the Ocean.” Along with Erden Eruç’s remarkable journey, the session will present a panel of voices from the field, academic/researchers, diplomats, and non-governmental organizations.

Being critical to survival on our planet, of the 380 million tons of plastic produced worldwide annually, an estimated 8 million tons leak into The Ocean. Plastic production is projected to triple by 2050 with a 30% annual increase in plastic reaching The Ocean. Tragically, used masks due to COVID-19 are the latest source of ocean pollution. These topics along with energy production related pollution in The Ocean will be discussed and ideas toward solutions will be sought and presented.

Overall, the session aims to contribute toward awareness along with suggestions toward needed global policy requirements on single-use plastics, on how to not only simply recycle them but to develop a globally binding treaty to transform our systems in order to reprocess and to reuse these plastics in various fields including construction, manufacturing, and daily consumption.

<EVENT@LIGHTMILLENNIUM.ORG>, or post their PLEDGES with their full name and city/country in the chat-box during the session. The best ones will be selected and presented during the Interactive Session on June 7, 2022.

A few key points on our Ocean:

Contact Name
Bircan Ünver
Contact Email Address
event@lightmillennium.org
Affiliation: Name of the organization, school, or business associated with the event
The Light Millennium, Charitable Global Human Advancement Organization
Country
United States
Is your event or activity (check of all that apply)
An announcement or resource, Taking place virtually, Open to the public
Full address (used to place your event on the map. For virtual events, write "virtual")
Virtual: https://us02web.zoom.us/meeting/register/tZYpduyvrTssEt2O5kz7HCRdeYfzTg4Vvic0%20%C2%A0%C2%A0
Name of venue (if applicable)
Virtual through Zoom
Image source (provide a name or source to be credited when photo is used)
Logo: https://worldoceanday.org/resource-type/logo/ , www.erdeneruc.com (right image)