For World Ocean Day 2021, join us for a panel featuring two of the leading experts on seaweeds and carbon sequestration; technologies that will not just mitigate, but REVERSE climate change – driving global ocean regeneration. As Seaworthy Collective works to build interdependent systems of solutions for building regenerative blue economies, seaweeds provide the foundational building blocks for the future ocean economy.

Little did he know that a decade later we would have to solve this problem for the Earth’s atmosphere. From these experiences he acquired a detailed understanding of the Earth’s carbon cycle and has envisioned sustainable approaches to restoring carbon balance in our atmosphere.  Nature does a great job of fixing carbon.  Primary production on the Earth has been fixing carbon for billions of years.  By restoring natural carbon cycles, we can restore food productivity of Earth while concurrently balancing carbon.  Once we reduce the carbon intensity of our own lifestyles, natural biogeochemical processes can take our civilization carbon negative using technologies comprising biochar to withdraw gigatons of carbon from the atmosphere for millennia. Learn more about Dr. Von Herzen’s work with the Climate Foundation. Much of Brian’s career has been in Silicon Valley, where he developed innovative technical solutions for companies like Pixar, Dolby, Microsoft, and others. Among other projects, he designed field programmable gate array (FPGA) applications considered to be among the world’s fastest at the time. Brian leads projects on land and sea with  individuals and groups in all parts of the world, including India, Africa, and the USA.

Dr. Loretta Roberson is interested in how organisms respond to anthropogenic impacts on coastal marine systems as well as ways to help mitigate or reduce those impacts. As more and more people move to coastal areas and global processes influence local conditions, more pressure is placed on these systems, often with devastating results like the global coral bleaching event in 2016.  Dr. Roberson’s lab has two main focus areas: (1) use of macroalgae as biomass for sustainable biofuel production and bioremediation and (2) understanding the mechanisms of calcification in corals.

We are focusing on the development of a tropical, red seaweed, Eucheuma isiforme, for the production of biomass for conversion to biofuels. We have put together a highly-interdisciplinary team from 10 institutions to design and develop a farm system that will not only mechanize the seeding and harvesting process to drastically reduce labor costs, but will also allow farms to be deployed in offshore areas for greatly expanded large-scale production. Partners include the Woods Hole Oceanographic Institution, DuPont, C.A. Goudey and Associates, University of Connecticut, CINVESTAV-Merida, Rutgers University, CariCOOS, University of Puerto Rico, Argonne National Laboratory, and The Nature Conservancy. By demonstrating the cost-effective production of biomass in underutilized areas of the Gulf of Mexico and tropical U.S. exclusive economic zones where year-round production is possible, we hope to disrupt current practices in the carrageenan market and reduce reliance on foreign imports. Currently, we are focusing on baseline data in three critical areas: the environmental impact of farm systems and their potential for use in bioremediation, the performance of algae and farm systems in rough offshore areas, and an economic and life cycle analysis of offshore algal farms. This project was selected for funding by The Department of Energy Advanced Research Projects Agency-Energy (ARPA-E) Macroalgae Research Inspiring Novel Energy Resources (MARINER) program. For info on the MARINER program, please visit:

MARINER: Macroalgae Research Inspiring Novel Energy Resources
Techniques for Tropical Seaweed Cultivation
Department of Energy Announces 18 New Projects to Accelerate Production of Macroalgae for Energy and Other Uses
To learn more about this project, check out the story “The Era of Big Seaweed is Upon Us“, by Rebecca Fanning.

Growing up in South Florida, Daniel was surrounded by & captivated by the Atlantic Ocean. Daniel received his Bachelor of Science in Mechanical Engineering from the University of Florida, focusing on ocean technology. During his time as an undergraduate, Daniel interned with the Woods Hole Oceanographic Institution as an Engineering Assistant and became a University Innovation Fellow. After graduating in 2015, Daniel spent two years as a Pilot & Test Engineer for Bluefin Robotics’ Bluefin-21 unmanned underwater vehicles in Boston. Daniel spent the following three years in San Diego as a Contractor for the Navy contributing to mechanical engineering research & development for maritime systems.

After five years in the ocean technology industry, Daniel saw a missed opportunity in the lack of infrastructure to support the development of solutions to positively impact the ocean. Combining his passions for ocean science & exploration, innovation & entrepreneurship, & mentorship, Daniel founded Seaworthy Collective in 2020 to empower current & aspiring oceanographic changemakers. Daniel is thrilled to foster a community facilitating the growth of startups in the ocean science & exploration field. Daniel is also pursuing his Master’s degree in Exploration Science at The University of Miami’s Rosenstiel School for Marine & Atmospheric Science, & was recently recognized as a Miami Global Shaper. 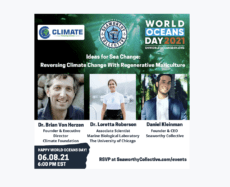