NAvakara is bringing “Waste Less Films Series”, in conjunction with World Ocean Day that falls annually on June 8. The 2021 Focus on Conservation Action is “Protecting 30% of our blue planet for a healthy ocean and climate by 2030”

This Waste Less Films Series presents 4 different documentary films from around the world.
They are films depicting the various lives affected and touched by waste. The films will tell stories about the impact of waste polluting our land, sea, and air against humans and animals.

“STRAWS” (33 minutes)
Sparked by research that plastic straws are now among the top-ten beach litter items collected globally, STRAWS has been lauded as one of “the 5 documentaries to make you rethink single-use plastic.”
Sequences narrated by Tim Robbins chart the history of straws from gold in Mesopotamia to our current disposable convenience consumption of billions of non-recyclable plastic straws every day. STRAWS are one of the single-use items contributing to landfills and the estimated 8.5 million metric tons of plastic waste entering seas annually, taking decades to hundreds of years to break down to microscopic levels now pervasive in bottled and tap water, soils, and even the air we’re breathing.

Minimum donation is Rp50,000/person
100% of your donations will be sent to Jakarta Animal Aid Network’s marine programs and campaigns. 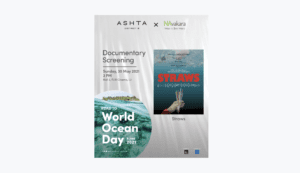