In this lecture, which takes place within the cycle of webinars on seabirds, some examples will be presented of how the data of individual seabirds tracking data can be used to inform conservation policies at various scales – from the local scale, through the identification and protection of Important Areas for Marine Birds (IBAs), on an oceanic scale, through global studies of bird distribution and overlap with threats, such as those resulting from fishing activity.

Seabirds are one of the most endangered groups of animals in the world – about a third of species are at risk of extinction, and half suffer population declines. To help reverse this trend, in 2003 BirdLife International created a global database on seabird distribution – the Seabird Tracking Database. This database results from the collaboration of more than 200 scientists worldwide, including in Portugal.

In this webinar we will highlight the discovery of one of the most important areas in the world for migratory seabirds – the NACES region (North Atlantic Current and Evlanov Seamount), in the North Atlantic. Identified with tracking data in collaboration with more than 60 scientists, this area is home to between 2.9 and 5 million seabirds over the annual cycle, of at least 23 different species, some from the South Atlantic and migrating over 13,000 km to winter in this area.

Several thousand birds from colonies in Portugal (mainly cagarras, but also black souls and the two species of nuns endemic to our country) use this area as a feeding area. The OSPAR convention for the protection of the marine environment of the North Atlantic is currently evaluating a proposal for the creation of a marine protected area in this area. To be designated, this area will be the sixth largest marine protected area in the world, and the first to be identified exclusively with remote tracking data. 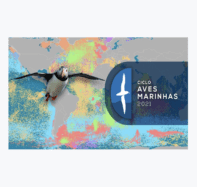 Number of registered events this year: 800 and counting!