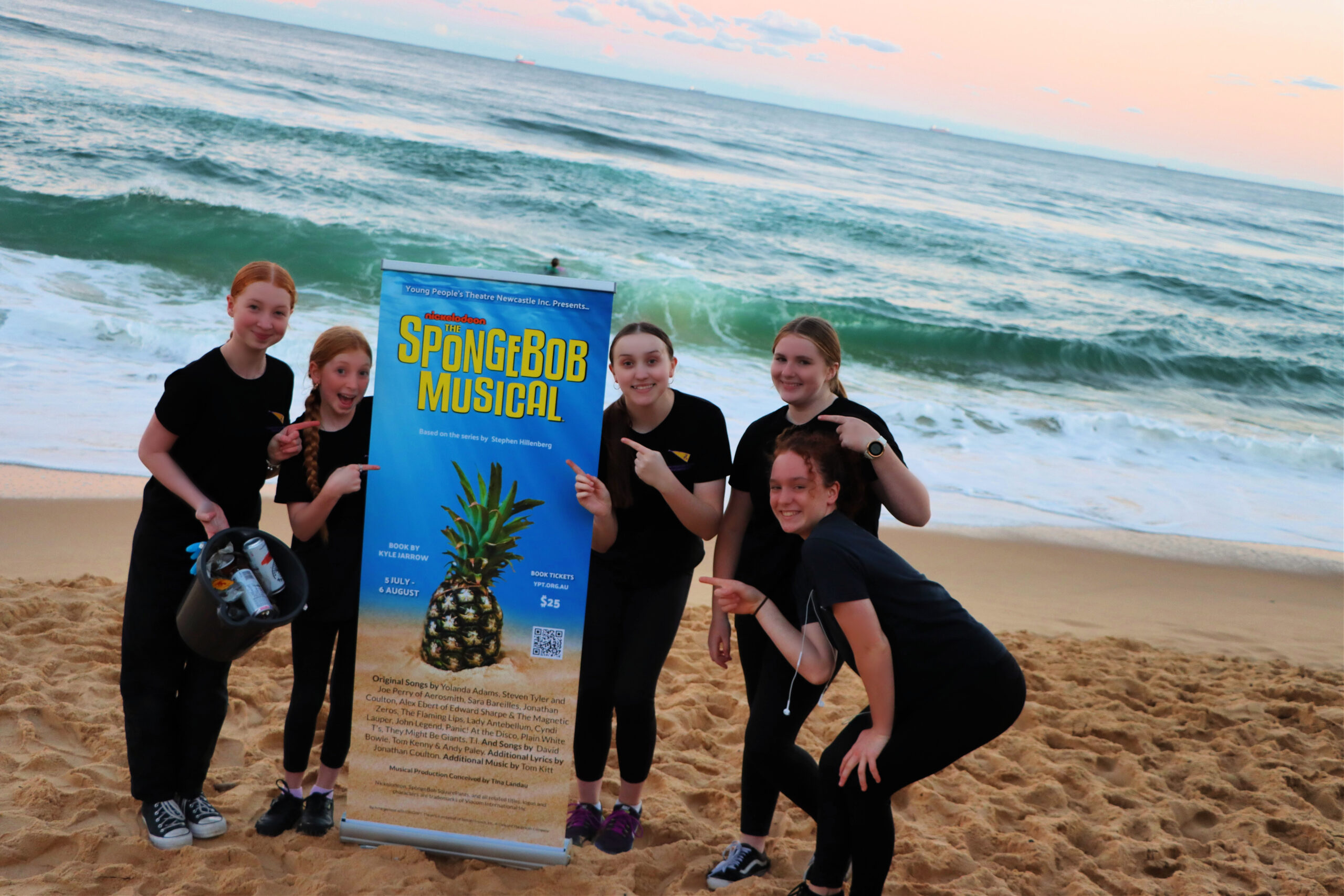 As suggested for World Ocean Day, the cast of ‘The SpongeBob Musical’ visited the beach over the weekend and whilst enjoying  our beautiful oceans, got their hands dirty collecting rubbish to keep our beaches clean. The cast found all sorts of rubbish, including broken boogie boards, disregarded shoes, fish hooks and plenty of general rubbish. The students packed a picnic dinner in wastefree packaging and learned about why it is important to look after our oceans.

Our cast members were very engaged in the clean up and doing their part to protect the animals under the sea. One cast member, Mya Turnbull (10), who has a particular interest in Ocean and Marine Conservation said “It is really important to clean up the ocean because if you leave the rubbish and it gets in the ocean, animals can digest it and die. It is thought that in a few years there will be more rubbish in the ocean than fish so we need to save those animals.”

‘The SpongeBob Musical’ is set on the ocean floor. All of the students play marine life in the production and are so excited to bring this undersea story to life. An important part of YPT’s  ‘The SpongeBob Musical’ design concept is to create social commentary on environmental pollution, highlighting disregarded objects found on the bottom of the ocean and how the Bikini Bottom characters have had to adapt to this contaminated world. Not only did our cast collect rubbish from the beach, but we are repurposing this rubbish to use as a part of the set for our production of the musical. One of the cast member’s parents, who works in environmental science, is cleaning the rubbish which will then be used on our set and disposed of properly after the production.

We will not only use the rubbish found by the cast to complete our design, with a set featuring what our production team is affectionately calling ‘found objects’ and discarded items from our cast members’ homes, or in council clean-up in the set. If you come along to the show, you may spy a fridge door, a broken ironing board and maybe even that broken boogie board found on the beach!

Through this design initiative, ‘The SpongeBob Musical’ is making a conscious effort to be environmentally friendly and educate our students in the process.  YPT frequently repurposes and uses recycled materials for our productions and has proudly created approximately 70% of the set for this production by repurposing existing set pieces and using recycled materials.

Our costume team have also adopted the reduce, reuse, recycle message, with 50% of the costumes created from existing materials and pieces in our storage, which is not only ensuring we created unique, creative pieces but guarantees we are considering sustainability and reducing waste.

Young People’s Theatre, Newcastle Inc is a not-for-profit community organisation that has been creating theatre for the local community for over 70 years. YPT’s production of Nickelodeon’s ‘The SpongeBob Musical’ plays at YPT Theatre from 5 July to 6 August and features 70 talented young people.