How can old discarded fishing nets be turned into fashionable clothing? This is what Healthy Seas is all about. Since its founding in 2013, the Healthy Seas initiative has collected 375 tons of fishing nets which have been regenerated by Aquafil into high quality ECONYL® yarn, becoming the basis for new sustainable textile products. 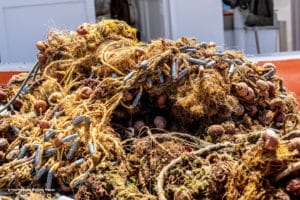 About 640,000 tons of fishing gear are left in our seas and ocean every year. The nets, which are made of plastic, are called ghost nets as they appear practically invisible under water. They remain in the seas for hundreds of years and continue to catch and kill marine animals every single day. In the meantime, they lose tiny little pieces, called microplastics, which then further pollute the seas, get into the stomach of fish and other animals and eventually end up in our food chain. 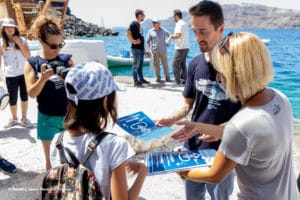 y 150 meters. What was even more special about this mission is that it was broadcasted live for educational purposes all over the world! The mission was exclusively sponsored by Italian fabric manufacturer, Carvico.

For the divers, volunteers and friends who were part of the #SaveYourBreath event, it was an unforgettable experience. Whether they were above or under the water, each of the 30 some people included in the team, had a special role to carry out.

Organising a big event on one of the most popular islands in the world is no easy task. Three months of vigorous preparations went into planning every single detail. And yet, when the team arrived in Santorini, there was still lots more to figure out.

Like, finding the right boats. Or, how will the server streaming the live feed be powered? With only 2 days to go until the big event on June 8th, some of us were busy with building the equipment while at the same time others were running up and down the island to find a power source that could handle the demand. In the end, we used 3 big batteries!

The divers on the other hand were 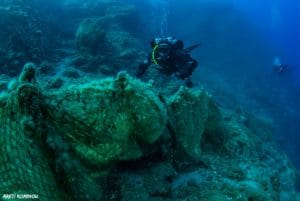 challenged by the steep underwater cliffs that were formed thousands of years ago when the Thera volcano erupted.  Pascal van Erp, Founder of Ghost Fishing, spearheaded the ghost net removal operation. He described underwater Santorini as a giant lagoon with very steep drop-offs which rapidly reaches 400m of depth and which would require good team work to get the net safely out of the water.  Thankfully, the diving team had worked together many times before and was able to remove a huge ghost net measuring approximately 150 meters!

After the nets were removed from the seabed, they were securely placed into large bags and will be transported for regeneration. They will travel to a cleaning facility and eventually be delivered to Aquafil who will transform and regenerate them into ECONYL® yarn to then be used by Carvico for the production of fabrics for swimwear.

And who knows, maybe this time next year you might be wearing one of these swimsuits and vacationing in Santorini!