Acknowledging the link between the climate and nature crises

Why our nations' leaders, convening now at COP15, must acknowledge the link between the climate and nature crises, setting up governments to take bold action on both.

Originally published on 5 December by The Center for  American Progress

Nations Must Link Climate and Nature Crises, or Risk Failing To Address Both

As the U.N. conference on biodiversity begins, participating nations must do what those at the recent climate change conference failed to accomplish: acknowledge the link between the climate and nature crises, setting up governments to take bold action on both.

Off the desert shores of Sharm El-Sheikh, Egypt, where the 27th U.N. Framework Convention on Climate Change Conference of the Parties (COP27) recently concluded, the Red Sea is teeming with life. Conference-goers who took a break to venture below the waves were rewarded by one of the most biodiverse and potentially resilient reefs in the world—and were reminded of what is at risk if humanity does not immediately address the joint climate and biodiversity crises.

The outcomes from the final COP27 decision text were mixed. There was historic action to establish a dedicated fund for the loss and damage that climate change causes, but commitments and action on mitigation and adaptation fell far short of what is required. Negotiators also missed an important opportunity when they excluded language tying COP27 to the upcoming “biodiversity COP”—the 15th Convention on Biological Diversity Conference of the Parties (COP15), which will take place from December 5 to 17 in Montreal, Canada. There, negotiators are charged with developing a new global biodiversity deal to halt nature loss.

During COP27, some negotiators proposed language for the final text that reflected G-20 leaders’ recent call for a transformative biodiversity framework at COP15, and noted the importance of synergizing the climate and biodiversity conventions. Yet when COP27 drew to a close, the final text failed to mention COP15 or to include much new language on the biodiversity crisis beyond what was already in last year’s Glasgow Climate Pact of COP26.

The climate and biodiversity crises must be addressed in tandem

Nature loss, like climate change, is accelerating at an unprecedented rate. A monumental 2019 report from the Intergovernmental Science-Policy Platform on Biodiversity and Ecosystem Services (IPBES) warned that 1 million plant and animal species—one-eighth of all the species on Earth—are now threatened with extinction, many within mere decades. Climate change is not the only human cause of this loss; the same report found that human actions have altered three-quarters of the land-based environment and about 66 percent of the ocean environment. These actions include land conversion, pollution, and the introduction of invasive species, as well as direct exploitation in the form of overfishing, hunting, and illegally trading wildlife and plant species. As biodiversity richness dwindles, so too does ecosystems’ resilience to further degradation, which threatens the wholesale collapse of many ecosystem services—the benefits that humans derive from nature—including those upon which our livelihoods, security, and institutions rely.

Scientists stress that the climate and biodiversity crises must be addressed together if either are to be solved. The Intergovernmental Panel on Climate Change makes this clear: “[M]aintaining the resilience of biodiversity and ecosystem services at a global scale depends on effective and equitable conservation.” Enlisting nature-based solutions to draw down carbon from the atmosphere, protect existing carbon sinks, and prepare for current and future climate impacts is a critical component of climate change mitigation and adaptation efforts.

Similarly, humanity cannot protect biodiversity and slow nature’s steep decline without tackling the climate crisis. Although nations at COP27 made unprecedented headway on the issue of loss and damage, there was a dangerous lack of progress on phasing out the continued burning of fossil fuels, which is the root cause of climate change and threatens to overwhelm humanity’s ability to adapt to it. It also risks turning COP27’s historic action on loss and damage into a “fund for the end of the world,” with the funds intended to help vulnerable nations recover and rebuild from loss and damage failing to even begin to meet the scale of impacts expected for a world that warms beyond the 1.5-degree Paris Agreement goal. Without major and immediate emissions reductions, the world will see escalating climate impacts and further deterioration of natural systems—with ecological tipping points triggered from the Antarctic to the Amazon. In this increasingly likely scenario, nature-based solutions would no longer be able to deliver mitigation and adaptation gains. In short, the siloed nature of global interventions, evidenced by the failure of the COP27 final text to tie the two U.N. conventions together, stymies progress on both fronts.

As COP15 commences, participating nations must do what those at COP27 failed to do: acknowledge the inextricable link between the climate and nature crises at the outset. This will set up governments to commit to and take bold actions at the highest levels to address these interlocked crises. Many environmental advocates are calling for a full-fledged “Paris Agreement for nature” at COP15—including setting new midcentury and 2030 global conservation targets, urging increased financing of and funding for nature protection, and encouraging countries to formally adopt these commitments in national policies.

The United States must demonstrate commitment at home and abroad

Although the United States is one of the only nations that is not a party to the Convention on Biological Diversity, its presence and leadership in Montreal can still influence the result. Most notably, the United States can demonstrate a clear understanding and acknowledgment of the interlinkages between the climate and biodiversity crises. As the United States did for COP26 in Glasgow and COP27 in Sharm El-Sheikh, it must send high-level officials to COP15, including agency heads and White House leaders. This action would illustrate the nation’s commitment to President Joe Biden’s intertwined climate and nature commitments at home, including the America the Beautiful plan to conserve 30 percent of U.S. lands, waters, and ocean by 2030. On a global scale, 110 nations back an international 30×30 goal, which is currently on the table for formal ratification at COP15.

Thus far, few world leaders have committed to attending the high-level segment of COP15, which takes place December 15 to 17; a visible presence of U.S. officials would signal to other nations that achieving strong outcomes is important for both U.S. domestic and international conservation policy.

In addition, the Biden administration can implement countless overlapping conservation and climate policies to protect biodiversity and improve climate change outcomes. Domestically, the administration should use its executive authority to accelerate the pace of conservation, expand nature access for underserved communities, and bring the federal fossil fuel program in line with climate and conservation commitments. On land, this should include actions such as designating new national monuments and wildlife refuges, issuing a national forest climate rule, rejecting the Willow Arctic drilling project, addressing transboundary mining pollution from British Columbia, and withdrawing sensitive and sacred lands from future drilling and mining. In the ocean, this should include creating and expanding national marine monuments and sanctuaries, prioritizing Indigenous-led conservation within the U.S. territories and across the nation, strengthening measures to protect fisheries habitat and advance blue carbon solutions, and stopping the expansion of offshore drilling. Internationally, continued prioritization of and enhanced actions to tackle deforestation and protect biodiversity are critical, as is increasing the support for ocean-climate solutions abroad, while leading on ambitious agendas within international ocean frameworks.

The well-being of humanity cannot be sustained on earth without healthy and resilient ecosystems. Therefore, the success of COP15 is just as critical as that of COP27. Without high-level leadership, major commitments of new funding, ambitious new conservation targets, and an ongoing commitment to integrating climate and conservation policies, communities will be left to face an uncertain, less resilient future—one that promises food scarcity, threats to human health, and total ecological collapse, and one that is devoid of the wonders of the natural world.

The authors would like to thank Frances Colón and Meghan Miller for their contributions to this column.

Use this COP15 Action Guide to ask your nation’s leaders to support a global commitment to 30×30. 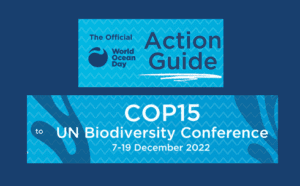 Check out the COP15 Action Guide!

Use this resource to ask your nation's leaders to support 30x30