The Ocean-Climate Connection: Thoughts from the Youth Advisory Council

As our new Youth Advisory Council Members are beginning their terms, we’re taking a moment to get to know a little more about them through their thoughts on the connection between the ocean and climate. There’s no better way to explore this connection than through the words of these inspiring, dedicated ocean advocates! 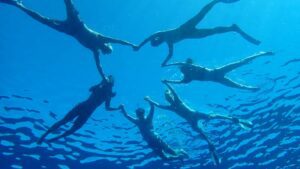 Despite being inextricably linked to the climate, the ocean is often left out of climate policy, and the climate movement as a whole. In your opinion, why do you think this happens? What are some ways to increase the relevancy of the ocean within the climate action community?

“Creating awareness about the role of the ocean and the effects of human impact on it through social media, art, and various other mediums, followed by the introduction of ocean studies at an early age can really help in bringing the ocean to the forefront of the entire climate change war. Taking field trips or even engaging youth with marine organisms and bringing some ocean element close to their hearts can go a long way in building bonds between ocean and community.” – Ajay Sawant, India

“We have to try to engage policymakers more with the sea, invite them to coastal and island areas, take them out on boats, show them underwater cameras, engage them with the marine environment, discuss its importance in combating the climate crisis, and we may then start to see the ocean mentioned more in climate policy making.”  – Caitlin Turner, Scotland

“I believe that amplifying the voice of international incubation efforts across Southeast Asia and most of the international coastal zone is crucial to further build and showcase the efforts of the ocean advocacy plans and movements.”  – Dali (Mohamed Ali) Raddaoui, Tunisia

“The tactics of increasing the relevancy of the ocean within the climate action community are different from the tactics for the general public, but the main points remain the same: hearing from people who are directly reliant and affected by the ocean, listening to both the issues and the solutions regarding the ocean, and of course, whenever possible, showing the effects of the climate in a direct and hands-on manner.” – Jasmine Rodman, Canada

“People who live inland do not always feel the same as coastal communities who live near the ocean. I think one way is to organize a visit or activity to the ocean that can expose the importance of the ocean to people and let their feelings resonate to protect the ocean.” – Ying Rui Neoh, Malaysia

“The Ocean really is a human’s best friend… I really think it could be beneficial if policy-makers spent time diving, exploring the sea, meeting ocean communities, and seeing the impacts of climate change first-hand, so it can remind them of how much power they hold and the importance of their actions.” – Rada Pandeva, Bulgaria

“The conversation around climate change is underpinned by the consequences affecting man, not considering us as an integral and active part of marine ecosystems too, because Earth systems are integrated and function as a unit. This, therefore, in my opinion calls for a fresh look at anthropogenic driven aspects of climate change with solutions that are simple and realistic to the poor and advantaged. These could be renewable sources of energy or empowerment through education.” – Matsobane Malebatja, South Africa

“Ocean-climate nexus and actions are inextricably linked. The ocean is the largest carbon sink on the planet and therefore holds many of the solutions we seek. By humbly tapping into the full potential of young people and the ocean, we will inspire hope and positive outcomes for many generations to come. The time to fund youth in ocean solutions is now!” – Bodhi Patil, Canada 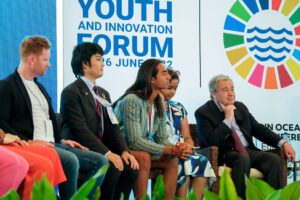 People who are ocean-focused are usually also people who are already paying attention to the climate movement. In your opinion, what are some ways to get non-related sectors/activist movements to help the ocean?

“Climate change affected impacts on land usually gets more attention in media and everywhere else, this pushes the issues of the marine environment behind. Up until I personally visited and saw the issues at the coast, I was completely unaware of what was taking place. This is why I started developing art based projects which help the people of the land get connected and start relating to the issues of the coast.”  – Akhilesh Anilkumar, India

“We need to push the idea that everything is connected to the climate crisis (the economy, art, travel, poverty, etc.).” – Arwen Revere, United States

“A big factor in encouraging related sectors is through highlighting the direct effects it will have on their specific sectors, this may cause an increased concern and therefore direct help. Also including representatives from these specific sectors in decision making and planning as well as discussions of positive outcomes may encourage them to help.” – Anya-Maria Hilaire, Saint Lucia

“I personally work on “artivism”, which is a term combining art and activism. I believe that common audiences are able to observe and appreciate art no matter their passions or interests. This has been my mode of activism, as I am able to tell stories and spread messages through my art.” – Stephanie Hung, Hong Kong

“One of the best ways is to start with the local and indigenous communities living by the ocean who are most directly or indirectly contributing to the ocean pollution as well as receive first hand impacts from the effect… Secondly is the usage of artists as well as influencers to promote and lead ocean conservation discussions, getting the attention of many who are not in the climate movement sector.” – Doreen Kaijage, Tanzania

“Much of Pasay City (one of the largest cities in the Philippines and where my mother works) is built on artificial land dumped onto the ocean. It takes all but one really bad typhoon to put us all underwater. The west has such a romanticized view of the ocean, but we from vulnerable countries have a relationship with it that is more rooted in respect, as our survival depends on it.” – Anya (Tanya) Francesca Granados, Philippines 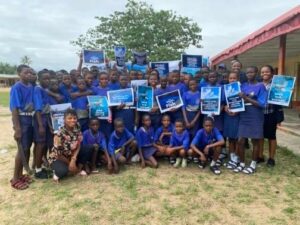 The voices of the Youth Advisory Council represent a diverse range of narratives and perspectives surrounding the ocean from over 20 different countries. Through all of these varied experiences, one thing remains the same: understanding and promoting the ocean-climate connection is vitally important to the health of the planet. These incredible activists are already working to protect our blue planet, and we can’t wait to see what these Council Members will accomplish throughout this year!